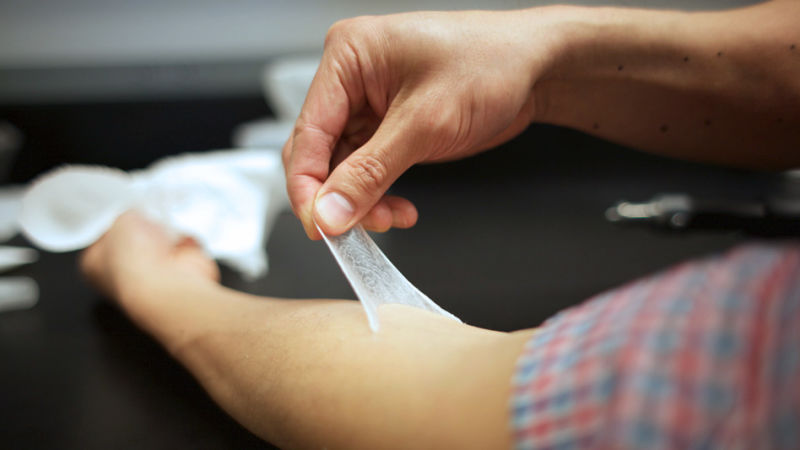 In the world of today, there is no shortage of cosmetic companies which claim that they have the ultimate product for wrinkle reduction. Finally, a genuine facelift cream that works remarkably well has been developed by researchers at MIT. The researchers have created a highly innovative cream that creates an additional artificial layer of invisible skin which works to smoothen out the natural skin of the wearer.

Scientific researchers from Harvard and MIT came up with the underlying principles of the functionality of the material then the film itself was manufactured by Living Proof, a private biotechnology company. The film which is now known as the cross-linked polymer layer (XPL) is applied topically in two simple steps and the end results are impressive. The first layer that is applied consists of polysiloxane components and the second layer is a platinum catalyst which triggers the polymers in the first layer to interconnect and thus forms a film strong enough to withstand wear and tear such as washing for up to 24 hours.

The applications for this new advanced film achieve more than just doing away with wrinkles on the user’s skin. It has also been shown to deliver medications safely for 24 hours at a time and it also provides protection to the applicant’s skin especially when there is a presence of wounds on the skin. Moreover, this cross-linked polymer material can reduce the loss of moisture by the skin. Nonetheless, the majority of consumers especially those who are aiming at reducing the visible signs of aging, are most appealed by its potential to offer a simple remedy for reduction of the appearance of wrinkles, tightening of the skin and generally providing a much younger look.

When the human skin is its prime, it is stretchable to about 180% and will still revert to its original form. But then, it is quite amazing to note that the artificial skin from MIT can be elongated up to a whopping 250% without showing any signs of damage such as sagging. With time, the human skin tends to lose its elasticity and this leads to defects such as puffiness under the eye area. Fortunately, in the testing stages of the XPL, it managed to compress the areas of the skin that were loose under the eyes of the subject, leading to a much younger look!

So far, there is still no official communication as to when this miraculous cream will start being available for use by those of us who feel the need for a product with such potential. A new company known as Olivo Laboratories was created by Living Proof for the sole purpose of developing the cross-linked polymer technology, with an aim of fine-tuning the functionality of the cream. The startup has already made it clear that it will eventually release the product into the market so that all those who need it can benefit from it. Meanwhile the Harvard and MIT scientists responsible for the research all have equity stacks and there is a good chance that this magical wrinkle cream will earn them a lucrative amount of money! What are your thoughts on this new age-defying technology?